Is it time to rethink the history of Easter Island as we know it?

The findings unearthed in the last twelve years by a team of archaeologists from the Royal Museums of Art and History (Brussels) require us to reappraise the way we view the history
of the island.

Nicolas Cauwe, director of the digs, shares the conclusions of his work with us. Previously unreleased findings dismiss some of the most commonly held myths, as well as transform previous hypotheses. Deforestation of the island did not provoke civil wars, any more than it did a cultural collapse or the destruction of the statues. Rather, we witness a formidable religious and political change. It consists of an entire population rethinking its ways in order to adapt to new times.

The time has come to rebuild the island's past, and the author, Nicolas Cauwe, takes us along with him on this exciting adventure. 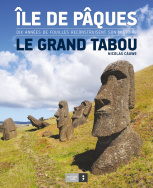